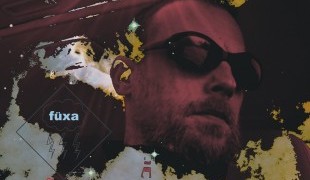 Füxa was created in 1994 and their music has been described as psychedelic and experimental. Their first collaborative effort was a collection of short, guitar and synth driven, primal instrumental space rock songs, recorded at home on a borrowed 6-track cassette recorder. The tapes were later brought to friend Erik Kassab of Gravity Wax for mixing and mastering at his Mission Control home studio. The resulting masters totaled over 90 minutes, and the best hours worth of music was selected for their first release, a hand colored, labeled and numbered cassette. This tape was sold at local indie record shops, and quite a few copies were given away by the band. College DJ Lunar Larry played many selections from this tape on his Friday night program, "The Life According to Larry", on WHFR radio. Nieman & Anderson at that time began to take the Detroit coffee house scene by storm, quickly building a cult following with their brief, psychedelic, erratic performances. The duo performed with the assistance of an old, literally falling apart Korg mono/poly synthesizer, often left to its own devices to produce loud, random arpeggios throughout the entire performance, which almost always cumulated in a drum circle where audience participation was encouraged to "feel good" with the band.